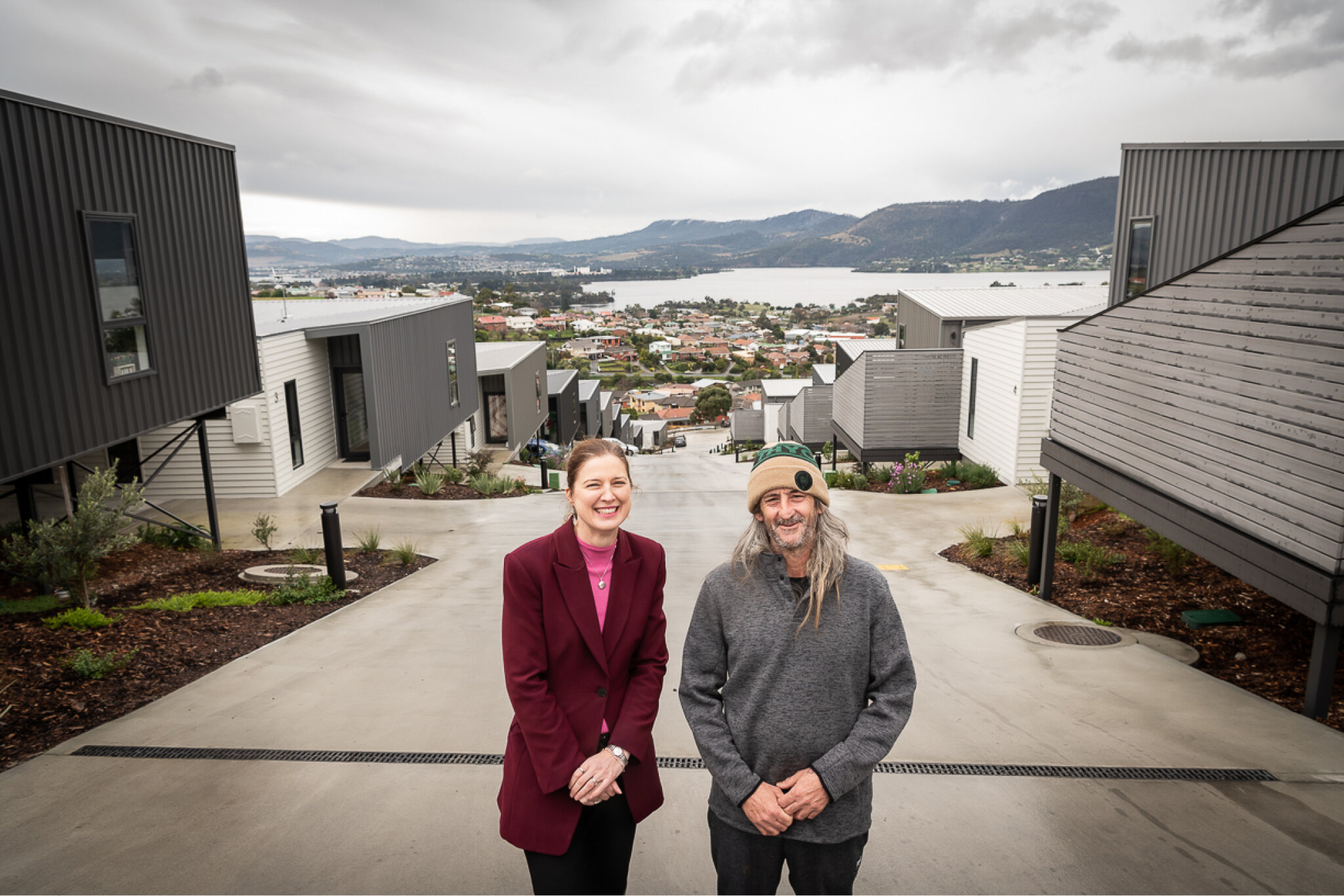 During Homelessness Week in August, Housing Choices Tasmania was joined by a range of government officials, including Federal Housing Minister Hon. Julie Collins and the Tasmanian Minister for Housing Guy Barnett to launch two social housing projects in Tasmania’s south.

The community housing developments at Oakdowns and Rosetta were designed by award winning architects Starbox Architecture for priority applicants on the Tasmanian housing wait list, who are unable to afford private rental or home ownership.

Minister Barnett launched the 16 well-designed energy efficient homes in Oakdowns, near Hobart, and met with residents.

The development was jointly funded by the Tasmanian Government via the Community Housing Grant 2 Program and Housing Choices Tasmania.

Single Dad, Marko said Oakdowns was his first experience of community housing and that the housing quality as well as its proximity to education and work opportunities had been a life changer after years of insecure housing and no fixed address:

“I can’t explain how much a stable, affordable and comfortable home has helped us. It’s got everything we want,” he said.

“We see first-hand the need to deliver quality, secure, affordable housing to those in our community who are vulnerable for many and varied reasons and increasingly for those that are unable to pay market rent and are completely locked out of private ownership,” she said.

Housing Choices Chair Heather McCallum said Housing Choices was committed to continuing to work with the State Government to combat the housing shortage.

“With the Tasmanian public waiting list at 4500 and Hobart one of the most expensive cities in Australia to rent, relative to income, we are committed to doing even more here and look forward to partnering with government to help deliver their target of 10,000 dwellings by 2032,” she said.

In Rosetta, Federal Minister for Housing and Homelessness Hon Julie Collins launched a second new social housing project, by Housing Choices Tasmania in partnership with the Department of Social Services.

Joined by residents, the Minister planted a native tree in the communal garden at the property that is providing much needed social housing to 26 households unable to afford private rental or homeownership, including people with disability.

Built by Oliver Kelly construction, the development overlooks the Derwent River and Mt Direction and was made possible through a federal grant under the Hobart City Deals with investment by Housing Choices Tasmania.

Joined by Tasmanian Small Business Minister Madeline Ogilvie, Minister Collins was shown around the development by resident and single Dad of two Cameron, together with Housing Choices Managing

“Housing Choices Australia is proud to be part of this development … and we look forward to continuing our partnership with the Federal Government into the future.”

The homes are energy efficient and close to education and employment opportunities, healthcare, schools, parks and support services.