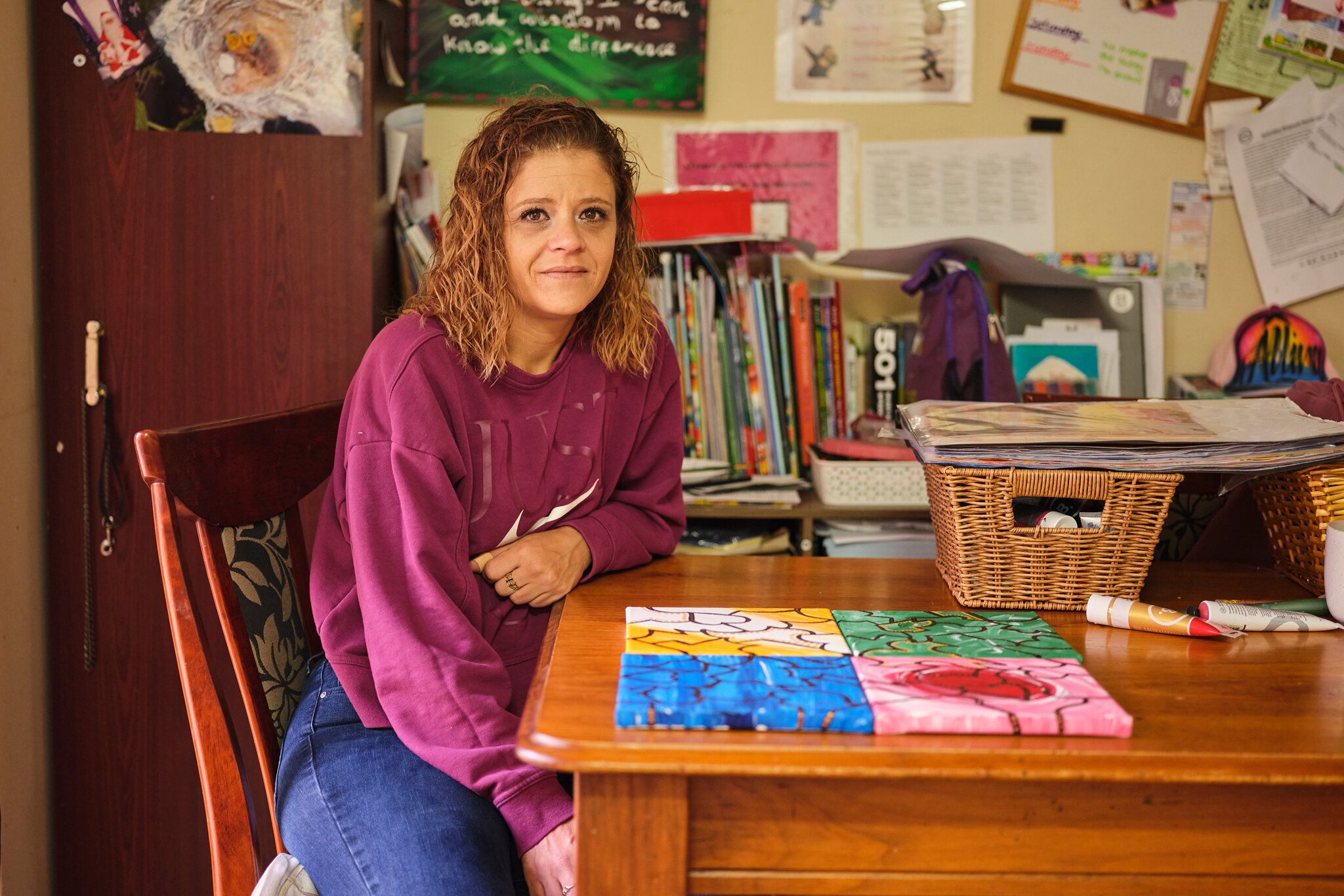 Resident story: Allira’s home is where her art is

Yued-Whadjuk woman, artist and Housing Choices resident Allira was hesitant to enter the 2022 Western Australia Tenant Art Show. The paintings dotted across the walls of her two-bedroom unit were created for her own enjoyment, she explained. “It’s like art therapy. I find I can get my jitters out … If I put it on canvas I feel better,” Allira said.

But with a little encouragement from Tenant Engagement and Capacity Building Officer Alex Kepes, the self-taught artist put three of her dot paintings on display.

“My first visit to Allira’s home in 2021 I was struck by the children’s colourful artwork and inspirational sayings on the walls. Among piles of schoolwork and papers I spotted a beautiful, colourful and intricate dot paining on her dining table, she shyly told me she loved to paint as a hobby, how it made her feel calm. I knew then we had found another talented WA artist,” said Alex.

Allira said inspiration for her work comes from a range of places, with First Nations musicians, authors as well as her own connection to her people and Country influencing her most recent pieces.

“I feel privileged, in a sense, to be able to put my artworks out there without any repercussions,” she said.

“It took me a long time to discover where my ancestry is actually from … recently we discovered it was Yued-Whadjuk.

“Growing up people would say: ‘you’re not Aboriginal’ and I would say ‘I am’. The way I found out was really random. A neighbour of ours said they’d just heard on the radio that the city council for the Ballardong area have got some land claims in. It was as simple as making a phone call, and my mum giving the names of family members.

“SWALSC (South West Aboriginal land & Sea Council) officially confirmed who my mob is.
“Hearing it on loudspeaker after all of those years, was like, wow. I wish I had recorded it.”

Allira said finding a creative outlet had also helped her teen children Tahlia and Jeramiah express themselves. Tahlia is a fellow painter and Jeramiah chose Lego as his medium of choice.

Artwork from all three has gradually filled their home of eight years.
Before finding accommodation with Housing Choices, the family were living in unsuitable accommodation.

When Tahlia and Jeramiah were children, Allira left an abusive relationship and was forced to change addresses. She applied for multiple rentals in the private market but was continually knocked back.

“I would put rental application in after application,” she said.
“With you guys (Housing Choices), we were accepted for who we are.
“I’m extremely grateful to be in the position with Housing Choices that I’m in.
“I know that in six months’ time they aren’t going to go sell the property and the kids and I will be homeless.”

Allira said it had been important to be able to make the property their own and keep the four-legged members of the family under the same roof.

“The backyard was pretty blank when we moved in, so it was good being able to do bits and pieces and make it our own in our own little way,” she said.

“We’ve made it our home.

“We have a dog and a bird. Indie is a little mixed dog – she was the runt of the litter. We also have a little Australian Ringneck parrot, who was a little rescue bird who was being picked on and attacked by its mob, so we said come live with us.”

Allira has no immediate plans for her future artistic endeavors.

“I’m seeing where it goes. It’s out there and I’m running with wherever it’s going,” she said.

“I’m putting it out into the universe and seeing what the universe is going to do with it so to speak. I’m not going to sit there and push it on others.”